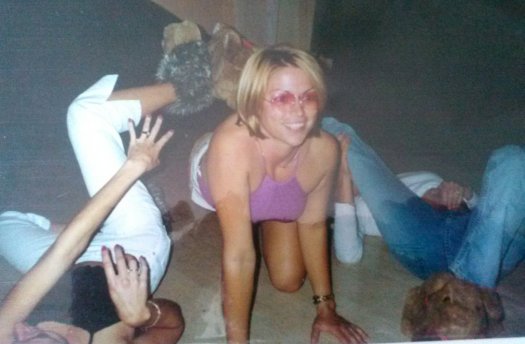 Up until this point I’d lived in Indiana, Illinois, Georgia and Orlando and getting my things from A to B was like a scene from ‘The Beverly Hillbillies’. Moving trucks were always too expensive so I would grab a few good friends and their vehicles, load them up and head out. There would be crates strapped to hoods, items dangling out of windows, garbage bags full of clothes, boxes stuffed in no particular order and typically a few cocktails along the way. I know, I know, drinking and driving is bad and now that I’m a ‘grown up’ I would never, but when you’re 25 and at this time in my life, very dumb, it was normal.

Along the drive I dazed off into sort of a soul searching mode. There were definitely moments where I was proud of myself for getting out of Indiana and making it this far on my own, but those were overshadowed by the pathetic and embarrassing ones. With each new zip code I tended to leave a bit of the useless me behind in order to make room for the new and improved Carrie I was sure to be. This time the goal was to make better dating choices by not falling so fast and maybe just stay single for a while. I was unstable when it came to boys and knew it but for some reason there was no controlling my jealous, possessive and nutty behavior.

This was my first time in Tampa and it was a huge upgrade from Orlando. First you have water on both sides of the city where as Orlando was land locked. Beautiful Tampa Bay is lined with gorgeous homes that look like they belong to celebrities and millionaires and just 50 feet from my new studio apartment was the Gulf of Mexico. St. Petersburg and Clearwater beaches were just across the bridge and they are loaded with bars, shops, restaurants and hotels. It was a whole new beginning for me!

Once we arrived in Tampa, the plan was to unload and hit the bar scene to celebrate my freedom from the bad boyfriend and my new promotion and pay increase. Now by pay increase I mean enough money to maybe break even each month between the new rent payment, increasing credit card debt and bar tabs.

Our ridiculous caravan pulled in with music blaring and buzzes rolling, which was probably not the best first impression as we cruised by the rental office. All of the chaos attracted a few of my new neighbors who were quick to lend a helping hand!

By the time we unloaded, everyone was smashed and couldn’t wait to hit Ybor City. There you will find several blocks lined with bars, restaurants and clubs which was a good 15 to 20 minute drive from my place. This strip of paradise was soon to be my new hangout and a place where I would stupidly drive home hammered, not ever once considering the consequences. Now I’m not sure if you remember me mentioning a few blogs back about the DUI I received when living in Georgia? Well, I obviously didn’t either and that violation was soon to catch up with me.

Every weekend and some week nights you would find me slamming back shot after shot at the Green Iguana before climbing up on the bar at Bar Tampa to show off my sloppy dance moves. But we’ll come back to that part of the story, let’s get back to my new home.

It was only one room with a tiny kitchen and an even smaller bathroom but it was perfect. For a while I just had a mattress on the floor with a small love seat separating the space into 2 rooms. The sofa faced the Gulf and a tiny TV that I’d been lugging around with me for years. It’s mortifying to admit but I was a slob and having a dog that shed in my small space didn’t help either. I can’t imagine what people must have thought when they came over and what’s even sadder is that I had no idea what a pig I was.

This next part I’m not proud of and I wasn’t planning on mentioning it because my heart breaks just to think about it, but if you’re going to read about me, you need to hear the good and the bad. I was a horrible dog owner. Mr. Travis, my tough beagle mix would be left alone for hours, with no lights on, probably dirty water to drink and taking him for a walk was the last thing I wanted to do after stumbling home drunk at 4 am. Poor baby, I would give him like 5 minutes to do his business so I could pass out and then sleep in until noon. When I adopted him as a puppy in Georgia, like so many people, I didn’t realize the magnitude of what it took to have a pet. Growing up we had dogs and somehow, one of the 3 of us kids would either leave a door open or the dogs would rush past us and get out only to meet their fate in traffic on the main road. We didn’t treat them like family, more like possessions or a nuisance. Today I despise people who have animals and treat them the way I did, but I guess if you don’t know any better than how would you know you were doing anything wrong? Since that time I’ve become the most amazing animal lover, owner and advocate and even started a small company for a bit called Hippiekit. The goal was to bring awareness and charity to animal rescue and the environment. During those years I found homes for many dogs while also spending my free time volunteering with various shelters. Mr. Travis had it rough until the second half of his life, when I made everything right.

As for friends, I was lucky to have an awesome mate to party with. He was the person my friend from Orlando connected me with when I first arrived, we will call him Techie! This man was a far better person than I which is a big reason were just friends. He was kind, smart, responsible and motivated and I knew if tried to date it wouldn’t last and our friendship would end, which I couldn’t bear. We had so much fun together and having him in my life was super important. Techie wasn’t a big partier so after I was done making a fool of myself dancing on bars and falling over drunk, he was usually there to ward off the slimy guys I was sure to attract with my irresponsible behavior and make sure I made it home safe.

After about a year of finding myself and dating for fun, I met a wealthy guy named Darren. Prior to this the only person I dated with money was Mr. Big, but he was married, so after the novelty wore off, the guilt set in and I ended that affair.

Darren was a few years older than me, came with a ton of friends, fast cars and a 20 foot powerboat which we played on every weekend. This was my first introduction to life on the water and I loved it! This man would also open up my world to the drug party scene….and unfortunately, I loved that too…!

2 Replies to “Tampa was a huge upgrade from Orlando..”

Becoming you´re own boss Being a kid in the 70's and 80's breaking up bullyinginthe80's dating at work Dealing with the wealthy From having a boss to being you´re own boss! getting engaged for the wrong reasons getting engaged too fast getting fired Getting your heart broken in your 20's going out alone abroad hanging with celebrities How I broke free and chased me dream! How I broke free and chased my dream! I wasn't book smart, I was street smart leaving a great relationship for a job Moving away from home moving in too fast Nice, France Partying with your boss Private Jets Sexual Ignorance traveling abroad alone Traveling abroad for the first time Uncategorized working on super yachts You can change your life at any age You don't need a man to be happy Young Love